Shirley Infant and Junior Schools have celebrated their centenary in a range of events held during June.

The aim was to hold a series of events that would appeal to past and present pupils and staff and would involve the local community members who were interested in the school.

Search for the oldest past pupil 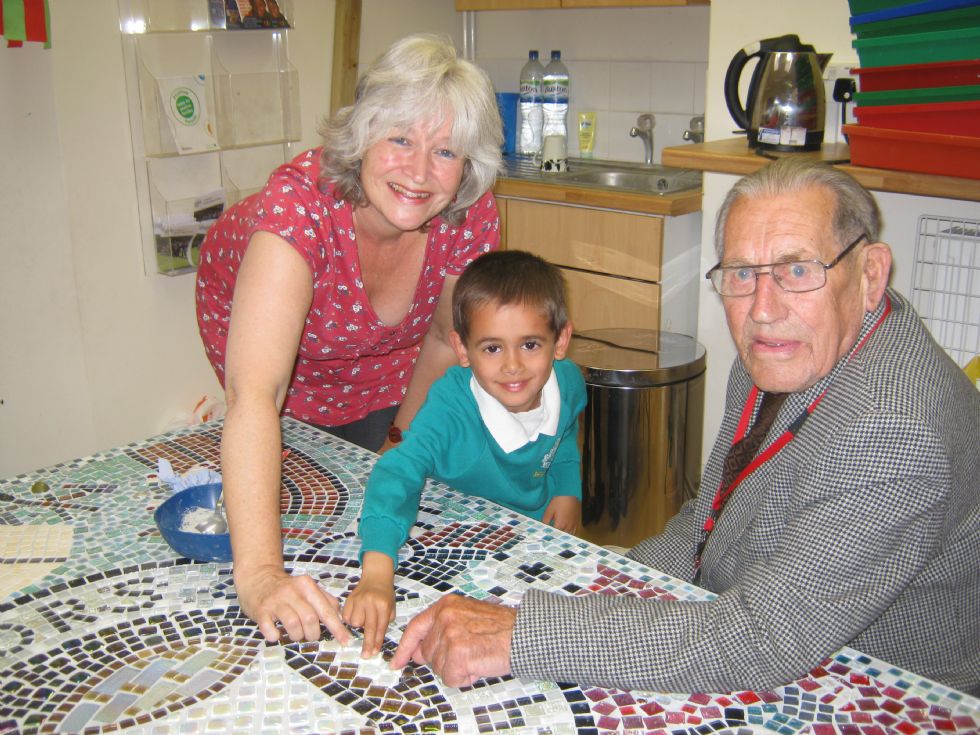 It all began with a radio advert appealing for past pupils to get in touch. It was hoped that past pupils would contact us and we could find the oldest past pupil and invite them to school. We were contacted by Edward Jock Scammel 96 who remembers going to Shirley Boys School. He left in 1930 at the age of 14 and his name was found  in the admissions book.

Mr Scammel came to look around the school and met our current youngest pupil, Yashan Robinson. Together they put the final pieces into the centenary mosaic. Pictured here with Hilary Moore, artist and past pupil who worked with the children to design and create commemorative mosaics.

Under the guidance of Hilary Moore, an artist and past pupil of the school the children of both schools helped to design and create mosaics to commemorate the centenary of the schools. The Infant School mosaic depicts the school logo and the woodland animals that the classes are named after, while the Junior School mosaic shows the school’s familiar owl logo along with children’s own designs of activities that represent activities they like to do at school. 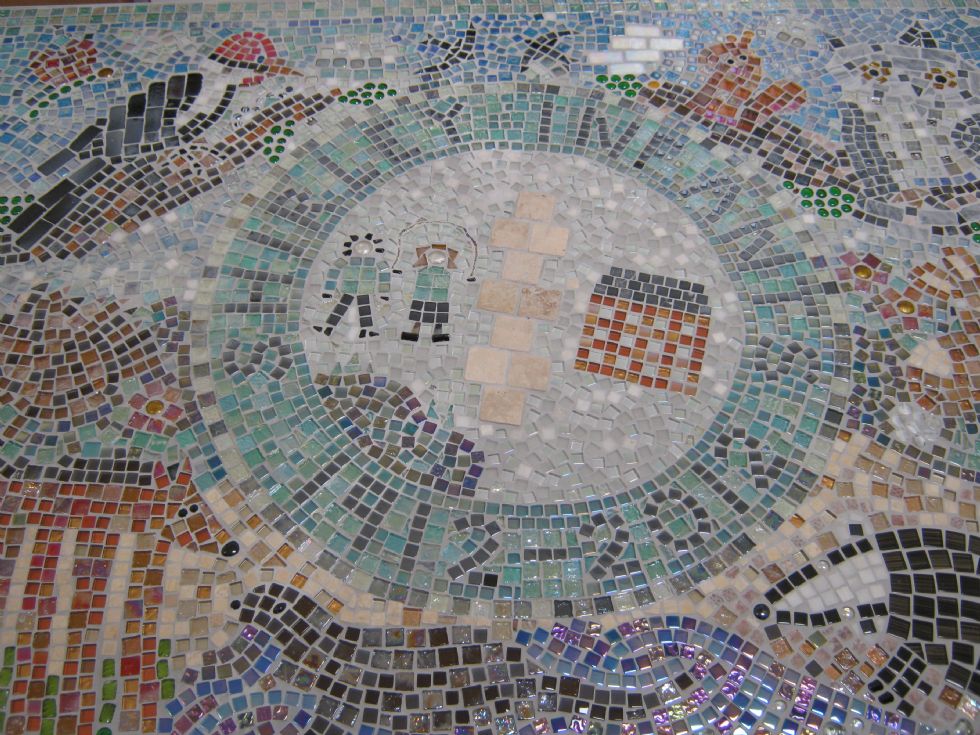 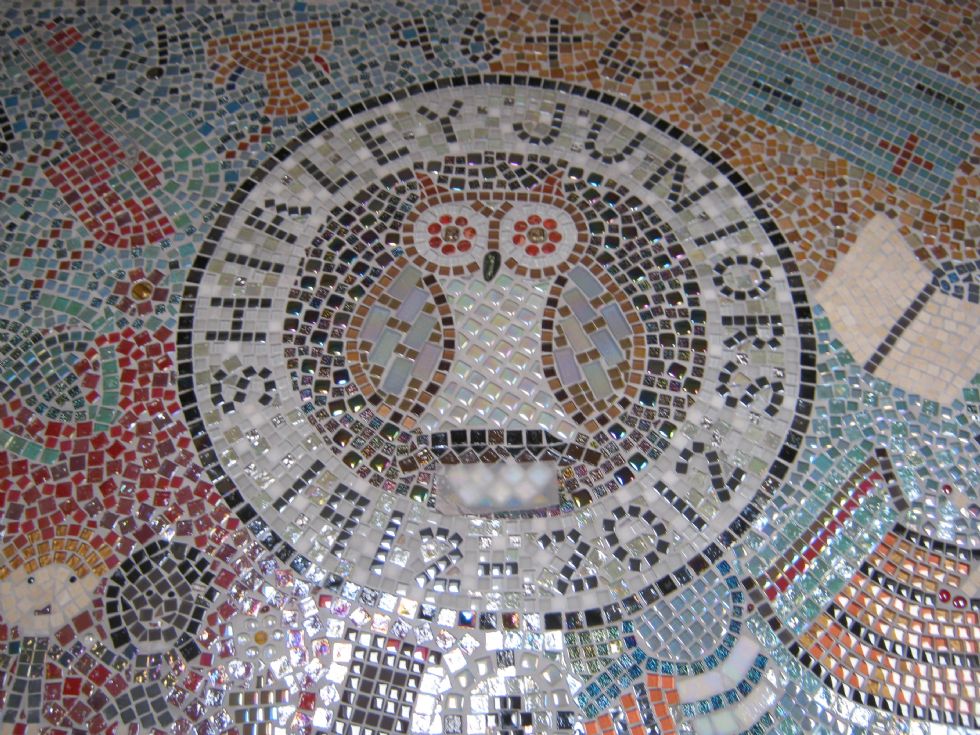 On Wednesday 11th June,  170 past pupils of the schools joined current staff for a celebration evening which included tours of both schools, a talk on the history of the schools by Michaela Lawler-Lavene ( FOSJP Shirley Heritage Project) and an opportunity to view an exhibition of artefacts related to the schools which had been assembled by Michaela and a team of willing and hard working volunteers who spent hours trawling through archives and contacting past pupils for information about the fascinating story of the Shirley Schools. 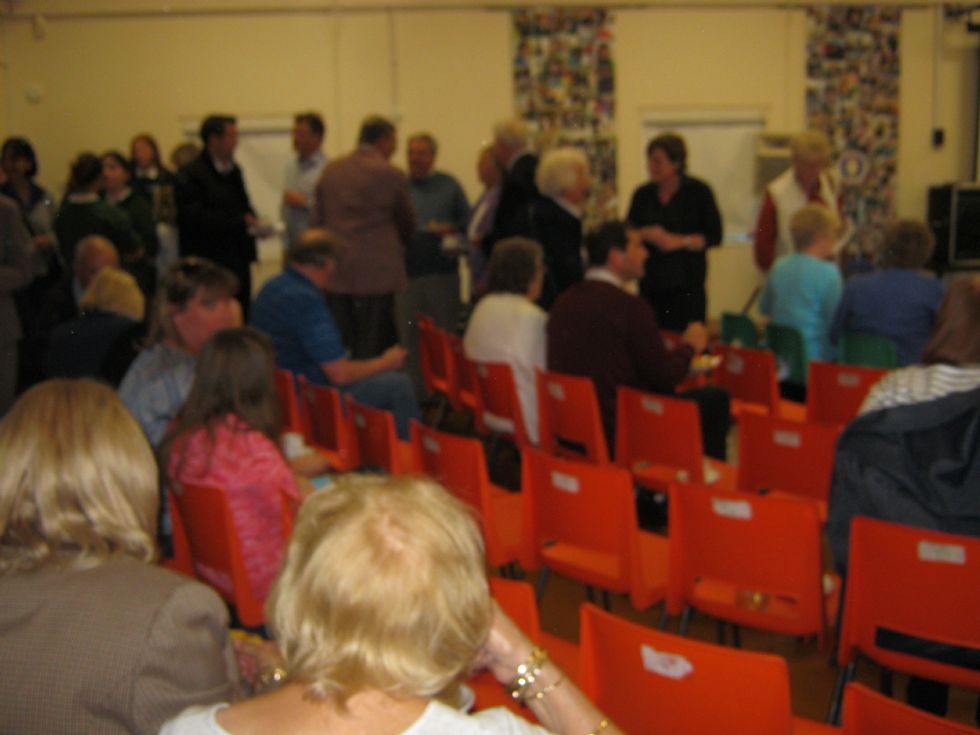 For the current pupils at the school Friday was a fun day!  Infants and Juniors had a picnic lunch in the grounds (thankfully not spoilt by rain, although the wind seemed gale force!) which was followed by fantastic entertainers. 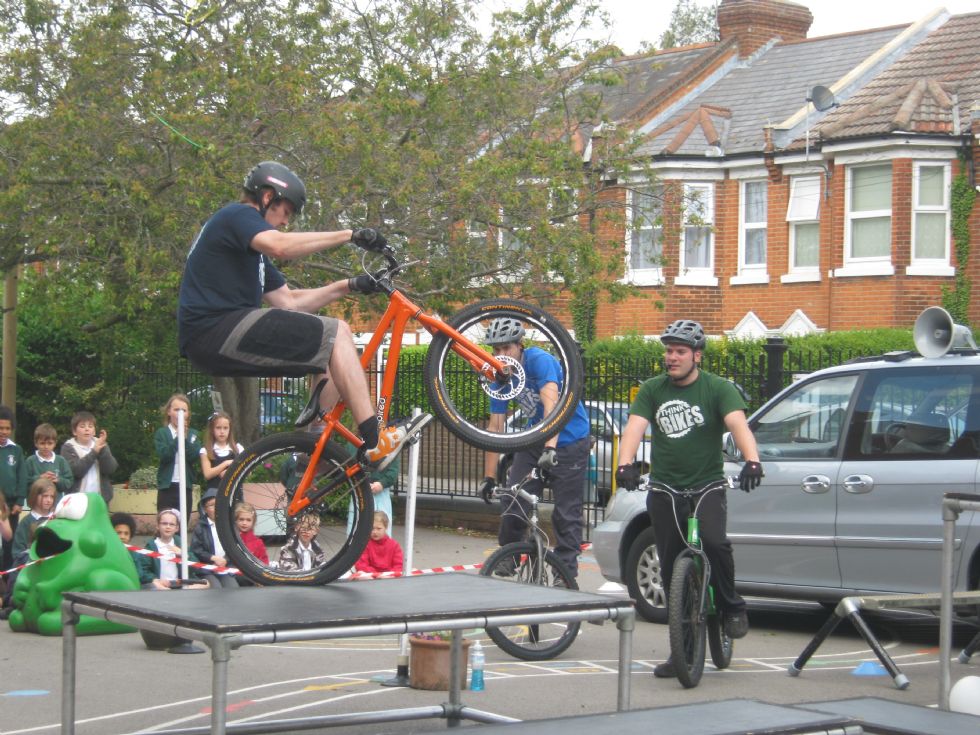 In the Junior hall African Acrobats entertained the children with an amazing and daring display which left the children cheering and clapping, while in the Infant playground a stunt bike team attempted impressive tricks. 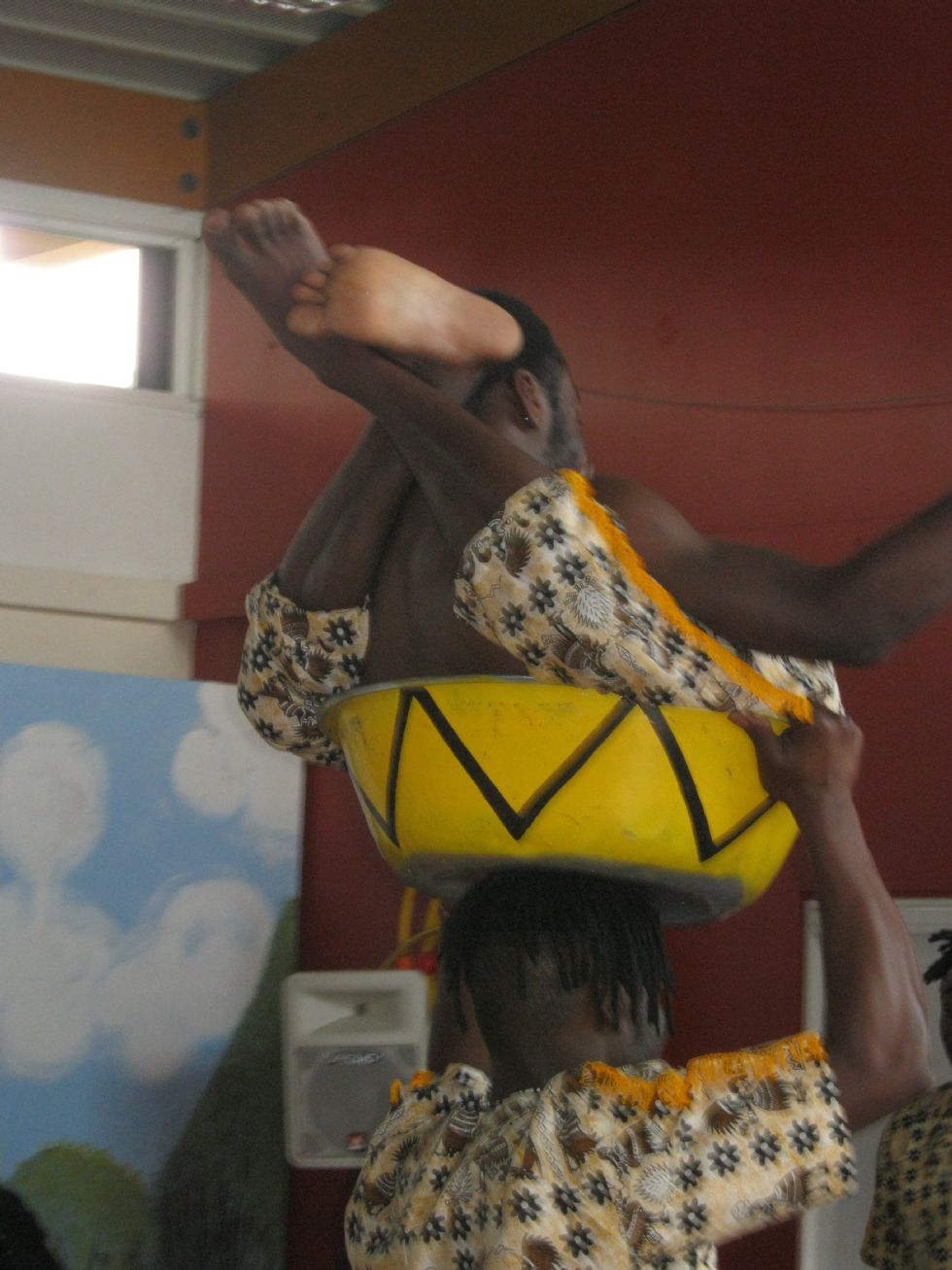 On Saturday the celebrations concluded with a centenary summer fair which opened up the schools to the local community. Despite the windy weather a great number turned out to support the schools including the current Mayor, Councillor Derek Burke and the Lady Mayoress, Mrs Christina Burke. 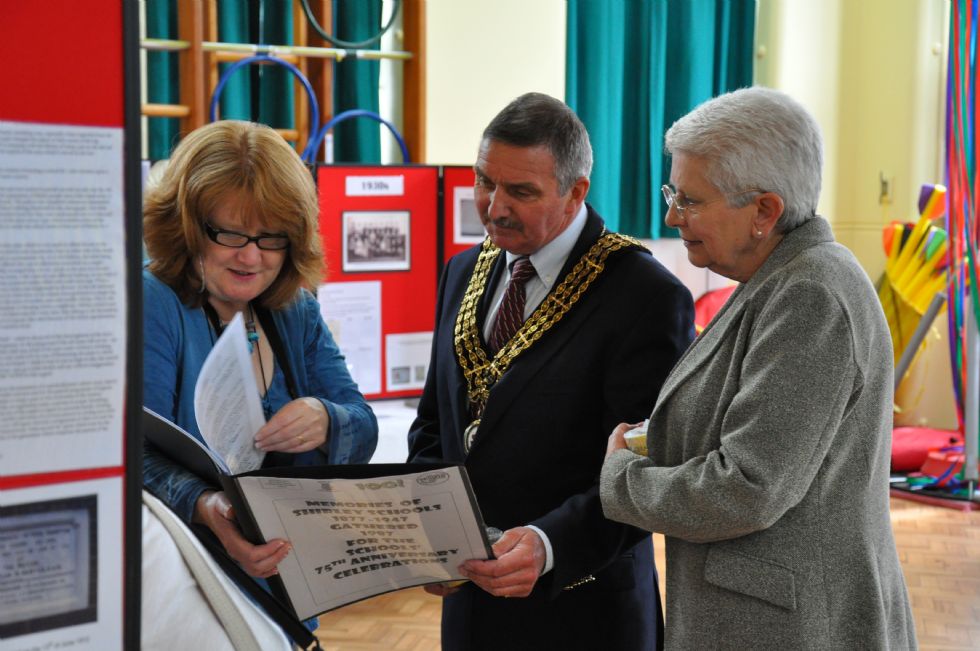 Visitors were conducted around the schools by school staff and were able to enjoy the history exhibition, while others were entertained by pupils from both schools showcasing their talents which included singing, dancing, and drama performances. 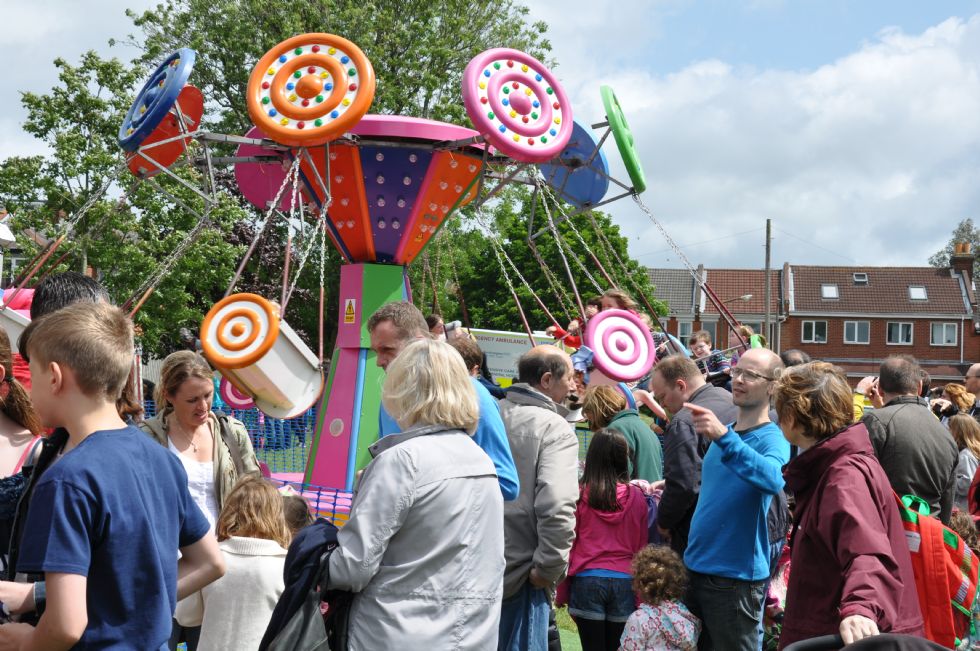 So the school bell rang each day to summon the children to school, the Infant children dressed up in Edwardian costume to learn about life at school 100 years ago and the Juniors considered their own and past pupils’ favourite school memories. 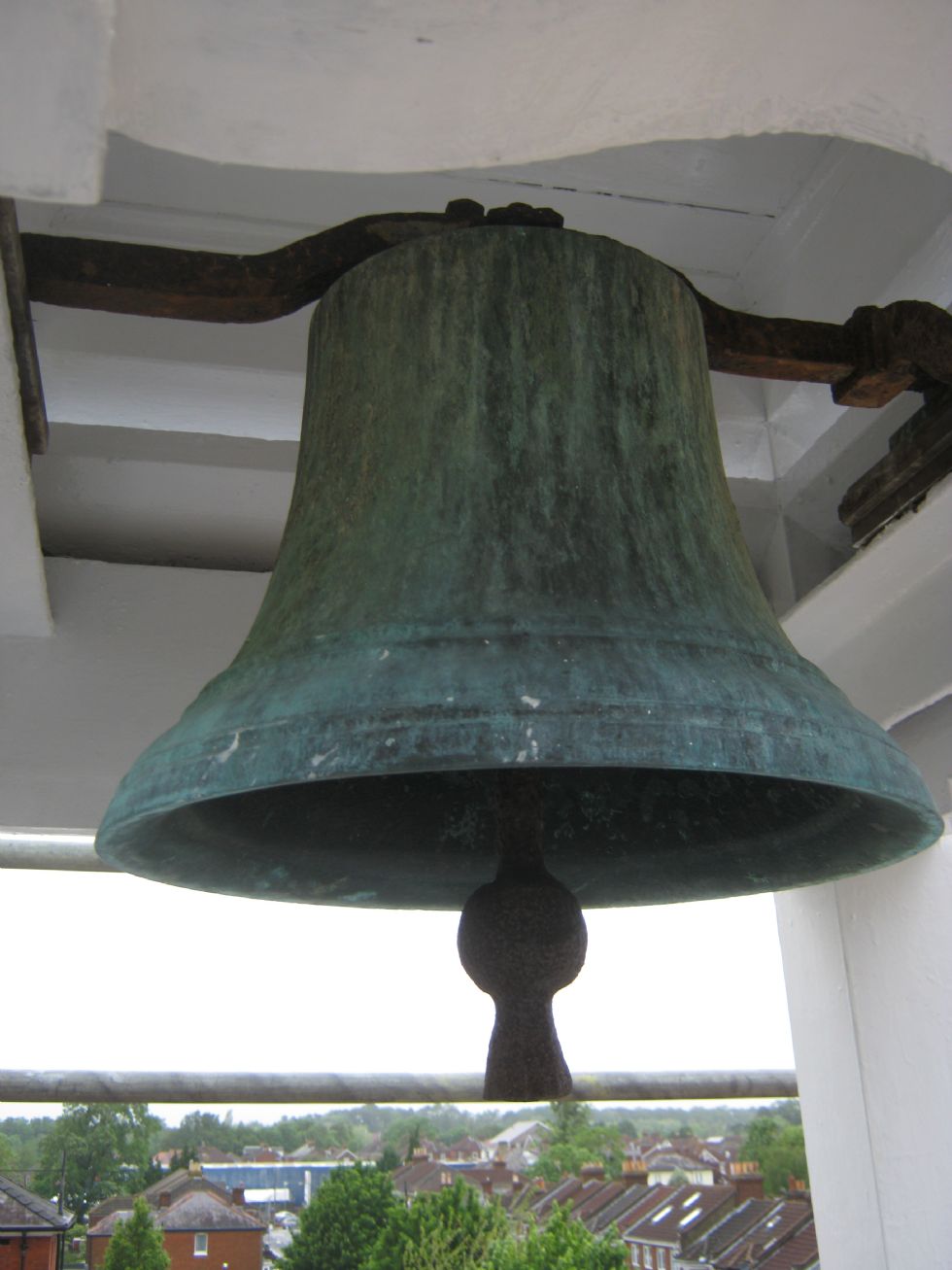 We hope that the children will take away from the week memories that will last well into the future and that they will one day say ‘I remember being at Shirley when we celebrated 100 years…..’  If so, then it will all have been worthwhile.